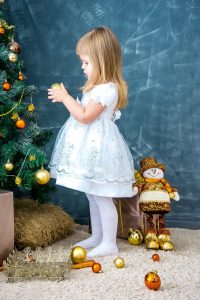 Hanna loved Christmas. She loved the excitement of the weeks before; shops full of glittering decorations and the spicy smell of mince pies and puddings. Christmas carols filled the air. Hanna loved making cards and gifts, opening the flaps on her advent calendar and best of all, writing to Father Christmas. Both her and her little sister Mary had written their letters and posted them. Now it was Christmas Eve, the day they would go with their father to get the Christmas tree and help decorate it.

Every year for as long as Hanna could remember they’d decorated the tree the night before Christmas. When it was finished and sparkling with fairy lights, baubles and glittering tinsel, they’d have hot chocolate, marshmallow and biscuits in front of the fire. It was a magical memory.

After breakfast Hanna and Mary went with George to choose the tree. A real one, prickly and smelling of pine, which the man at the garden centre assured them had been sprayed to prevent the needles dropping.

‘This one,’ Hanna said, pointing out a tall thin spruce that was far too big.

‘No this one,’ Mary said picking out a miniature tree. ‘It’s so sweet.’

George laughed and picked out a medium sized tree, perfect to take pride of place in the bay window of their small front room. At home he potted it and carried it into place. Next he went up into the loft to bring down the box of decorations.

Hanna and Mary watched, clapping with glee when he brought the box down in a shower of dust. It was covered in cobwebs and grime and had to be wiped over before they could open it, but inside Hanna the excitement was mounting.

First of all George took out the tangle of fairy lights. Then, with his wife Laura, they set about untangling them and draping them over the tree while Hanna and Mary unwrapped the ornaments in the box. This was Hanna’s favourite bit, unwrapping the ornaments. Each one brought a memory. It was like discovering them all over again.

She lifted out the silver foil bell she had made in her first year at school. Next she found the glittery snowflake Mary had made, then the wooden toy soldier Granddad had carved and painted. The colours had faded and the soldier’s foot was chipped, but it still reminded Hanna of her granddad who had passed away before Mary was born.

‘Look at these Mary,’ she said. ‘They’re from Gran’s tree. Do you remember them?’

Hanna pouted. She remembered seeing them hanging on Gran’s tree. This was the first Christmas they’d be without Gran, but at least the decorations made Hanna feel closer to her. It was as though Gran was watching over her while she unwrapped the home-made decorations. The thought made Hanna smile.

Silver and gold baubles and strings of tinsel came next. One after another between them Hanna and Mary unwrapped things and put them on the side ready to hand up to her mother and father once the lights had been fixed on the tree.

‘Well, that should do it,’ George said, taking a step back to survey his handiwork. ‘Are we ready for the big switch on?’

Hanna and Mary jumped up, faces shining. ‘Yes,’ they shouted in unison.

George plugged them in and suddenly the tree, that had stood bare and green, now dazzled with fairy lights. Everyone cheered.

‘I’ll unplug them while we put up the rest of the decorations,’ George said. ‘Just to be on the safe side.’

Carefully Hanna and Mary took turns to pick out an ornament and hand it up to Laura or George to put on the tree. Each one they picked out was special. Apart from the things they’d made at school, which had only just survived, there were baubles they had added on their travels, each a reminder of a happy holiday or a special celebration. Among the ones from Gran’s there were memories of Laura’s own childhood.

At the bottom of the box Hanna found the Angel. She remembered it at once. It had always graced the top of Gran’s tree.

She was about to hand it to her mother when Laura said, ‘Oh no dear. Not that one. Look, I’ve bought a shiny new star for the top of the tree. A star like the one the wise men followed. Won’t that be lovely?’ Laura picked up a box Hanna hadn’t noticed before and took out a shiny silver star which she handed to George to put on the top of the tree.

Hanna and Mary glanced at each other. ‘What about the Angel?’ Hanna said. ‘Gran always had the Angel on the top of her tree.’

Laura smiled. ‘Yes, dear, but look at her. She’s looking a bit tatty now isn’t she? Much nicer to have a shiny new star on the top of the tree don’t you think?’

But no, Hanna didn’t think. She glanced down at the Angel in her hands. It was true, her dress was torn and the glitter mostly gone. Her golden hair was matted and one of her wings had come loose. Her face was dirty and it looked to Hanna as though she wasn’t even smiling. Hanna was sure she used to smile.

‘Are we all done?’ George said, stepping down from putting the star on the tree. ‘I’ll put the lights on again. Are you ready?’

‘Yes,’ everyone chorused, all except Hanna who didn’t feel ready at all.

George plugged the lights in. They lit up with sparkling brilliance, then flashed and went out. ‘Oh dear,’ he said. ‘One of the bulbs must have blown. Not to worry I have some spares.’

Over the next hour while Laura was getting the tea and George was fiddling with the lights, Hanna asked if she could have the Angel in her room. ‘She’ll watch over me,’ she said.

Upstairs, in her room Hanna got out her craft box. Carefully she removed the torn dress and wiped the Angel’s face and body with one of the wipes she had for cleaning her paint brushes. She looked a lot better after that. She re-attached the loose wing and smoothed out her matted hair. She cut out a band of white crepe paper, added glue and sprinkled it with glitter. She pleated it and tied it around the Angel’s waist with silver thread to make a new skirt. Then she did the same for her bodice. She wrapped tinsel around her head in a halo and criss-crossed it over her chest and around her waist. She looked as good as new, but she still wasn’t smiling.

Hanna propped her up on her chest of drawers. ‘You can stay up here with me,’ she said, but still the Angel wasn’t smiling. Hanna sighed and went downstairs for supper. The sadness of the Angel weighed heavy on her heart.

Downstairs things were getting more and more fraught. ‘I’ve used up all the replacement bulbs and the lights still don’t work. I knew we should have bought some new ones.’

George glared at Laura. ‘I’ll have to get some more bulbs and if that doesn’t work we’ll have to replace the whole lot.’

‘But it’s Christmas Eve,’ Laura said. ‘Where will you get bulbs, or new lights come to that? All the shops are closed now.’

George grimaced. ‘Well,’ he said. ‘It looks like we’ll have to have a tree with no lights. ‘I’m sorry.’

‘Will Father Christmas still be able to find us?’ Mary asked, a worried frown on her face.

‘Yes of course he will,’ Laura said. ‘Let’s go find him some mince pies and put them out.’

‘And a carrot for the reindeer,’ Mary said, following her mother out of the room.

‘There’s still the hot chocolate and marshmallows to look forward to,’ George said but it didn’t cheer Hanna up.

After supper Hanna and Mary sat in their dressing gowns in front of the fire drinking their hot chocolate and marshmallows. Hanna kept glancing at the tree. It looked so forlorn with no lights. It looked green and dull. No lights sparkled on the baubles and even the tinsel failed to gleam. It looked very sad, just like the Angel.

Later than night, when the girls were tucked up in bed waiting for Father Christmas, Hanna looked over at the Angel propped up on the chest of drawers. It seemed to be glowing, a soft light shining all around it, although of course it could have been a moonbeam shining in through the gap in the curtains. Still, Hanna smiled. It was as though the Angel was trying to tell her something. She knew exactly what she had to do.

She grabbed the Angel and tip-toed downstairs. Her parents were in the kitchen, clearing up after their supper. She crept into the front room and in the darkness she went over to the tree. Gritting her teeth she climbed onto the window sill. Gingerly she leaned over until she could reach the star. She lifted it off the tree and replaced it with the Angel. ‘There,’ she whispered. ‘That’s where you belong.’

As she tried to climb down she dropped the star. It fell through the branches, touching each one as it descended until it landed with an almighty clatter on the floor.

The sound brought George and Laura rushing into the room just as Hanna managed to climb down. As her feet touched the floor the lights on the tree lit up bringing it to sparkling life. A magical glow filled the room. The baubles shimmered and gleamed, the tinsel glittered and glistened, even the old ornaments seemed to twinkle in the light.

Everyone gasped. Hanna’s eyes lit up.

‘It must have been a loose wire and the falling star knocked it back into place,’ George said, but Hanna knew her mother was right. It was a Christmas miracle. She turned to look up at the Angel. She was smiling.

If you enjoyed this story there are plenty more in my Story Story Collections here.