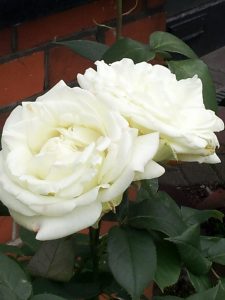 Alice surveyed the tangled mess that used to be Bob’s garden, his pride and joy. He’d spend hours out there, cutting, planting and pruning. She sighed. She’d let it go. Six months now since the funeral and she hadn’t even ventured out there. She blamed the cold, uninviting weather, the bare branches and frost-crusted grass appeared so desolate. The garden that used to bring such pleasure now only served to remind her of the depth of her loss, re-igniting the pain in her heart.

Spring beckoned. It was her favourite time of year. Bob loved the spring too with its promise of new life, golden daffodils and colourful tulips and iris. Alice heaved a sigh – she wasn’t ready for a bright new life – she wanted the old one back; things the way they used to be.

She sighed again. She knew Bob wouldn’t want her to be like this. He’d want her to get on with things and the make the most of the time she had left. Easier said than done, she thought.

She gazed out at the grass that needed cutting, the hedge that needed trimming and the flowerbeds that needed weeding. “Why don’t you get someone in?” her daughter Sarah asked. “It wouldn’t cost much to get someone to tidy it up.”

But Alice couldn’t bear the thought of another man taking Bob’s place in the garden. It wouldn’t be right. And what would the neighbours say? She didn’t want anyone thinking she was trying to replace him, no one could do that. Anyway, they wouldn’t do it the same as him – he had his own very firm ideas about gardening– things had to be done right. Set in his ways Alice used to say.

She smiled at the memory. That was one of the things she loved about him, his reliability. Predictability more like, Sarah said, but Alice loved that too. You always knew where you were with Bob. She didn’t know where she was now he was gone, but she wouldn’t be getting a man in to have the run of the garden that was for sure.

No – she’d do it herself. His tools were still in the shed. She’d do it just the way he used to.

The sight of the tools, pristine and orderly, jolted Alice back to earth. What on earth was she thinking of? She didn’t know where to start, then she remembered his Gardening Magazine. It still arrived every month. She hadn’t had the heart to cancel his subscription, it would be too final, like cancelling him out of her life.

Back indoors she swallowed her doubts and sorted through the magazines, opening the ones still in polythene. Inside she found the column headed ‘Jobs to do this Month’. Great, she’d start there.

She began by cutting the grass. According to the magazine the state of the lawn set the tone of the whole garden. They’d bought a new hover mower last year, much easier to manage that the heavy old roller one you had to push. Well, that was a start. Alice hiked it out and began to mow. She found it a lot easier than she’d expected, just like putting the vacuum cleaner round, she thought. In fact, she quite enjoyed it. Next, she trimmed the hedges. The garden looked so much better she thought she might even tackle the weeds.

“If something grows where you didn’t plant it – it’s a weed,” Bob used to say. Alice chuckled. She fetched the hoe and hoed up anything that looked as though it didn’t belong. Once she’d finished she glowed with pride. He’d be proud of her too, she thought.

All through the summer she hoed, watered and weeded. She bought new plants from the Nursery to fill the gaps in the beds, choosing Bob’s favourites. Sometime she found it difficult to keep up with all the jobs that needed doing, then she missed him more than ever.

One day, as she was working in the front garden, a man stopped at her gate. He raised his hat. “Good afternoon,” he said.

Alice smiled. She recognised him from church. He came with a group of ladies from the sheltered housing a few streets away.

“I was just admiring your garden,” he said. “It was always the best in the road¸ especially the roses, but I notice it hasn’t been looking so well lately. I’m glad you’ve decided to spruce it up.”

He chuckled. “It looks to me as though you’re doing a fine job,” he said. “Can’t beat a bit of gardening to chase the blues away.” He raised his hat again and moved on.

The next Sunday he nodded to her in church.

“He used to have the big house on the corner of the Avenue, you know,” Betty said.  “Huge garden and he kept it lovely. Always out there he was, planting, tidying up, cutting and pruning. House was sold last year. I bet he misses it now.”

Alice’s heart turned over. She knew what it was like to miss something or someone you loved. Tears welled up in her eyes at the thought.

After that, whenever Alice was in the garden and Harry passed by he’d stop and admire the plants. “That lavender’s a treat for sore eyes,” he’d say. Or “I’ve haven’t seen prettier geraniums this year.” Alice saw the same gleam in his eyes that Bob used to get when he talked about his garden.

She smiled and nodded and wondered if she should invite him in for a cup of tea. Then she’d think better of it. Best to keep the fence between them, she thought. She didn’t want anyone getting ideas.

Autumn arrived and, following the advice in the gardening magazine, she managed to sweep up the leaves and compost them. She was beginning to feel like a real gardener, until the weather turned damp and her knees started playing up and she found her back ached, then she’d think how pleased Bob would be and she’d carry on. Thoughts of him warmed her but then she’d be overwhelmed with sadness and a great swell of loneliness.

Each time she walked around the garden she recalled how Bob had planted rose bushes to mark milestones in their lives: Happy Event the day Sarah was born, Iceberg for their Silver Wedding Anniversary and Ruby Red for their fortieth. He took real pride in his roses. He’d won prizes for them. Now they looked straggly and in need of pruning. The magazine said this was the best time to do it. Alice had been fine with dead-heading them as the blooms faded but pruning was a different thing.

She checked the diagrams in the magazine and looked at the reaching-for-the-sky roses. There was no resemblance. Her heart fluttered. Supposing she did it all wrong and killed them? There’d be no prize winning blooms next year for sure. She thought about it for several days. Each time she gathered up her courage to step outside, secateurs in hand, her nerve deserted her. If she made a mess of it Bob would be spinning in his grave but if she didn’t at least attempt it she’d feel a complete fool.

She did nothing about it until, one day she snagged her sleeve on a rose bush growing alongside the path and tore it.

That was it; she’d have to prune them now.  She huffed and went to get the secateurs. She’d just raised her arm to make the first cut when Harry stopped at her gate.

“I wondered if you’d prune them,” he said nodding at the rose bushes.  “Best time to do it now. Cut them back hard for good growth next year.”

Alice’s heart sank. She really had no idea what she was doing. “Know much about roses do you then?” she asked.

He chuckled and raised his hat again. “Harry Budd, champion rose grower at your service,” he said.

Relief flooded over Alice. “Do you think you could…” she waved her secateurs at the straggly bushes. “I’ve never done this before.”

A wide grin spread across Harry’s face. “I’d be delighted,” he said.

Alice’s heart pounded as she opened the gate. Was she doing the right thing? It was as if she were letting the rest of the world back into her life. What would Bob think?

Warmth flowed through her. He’d be happy that she was moving on, making a new life but keeping the old. “One is silver the other gold,” Bob would have said.

A new found sense of peace settled in her mind as she opened the gate wide to let Harry in.

If you enjoyed this sory there are plenty more in my Short Story Collections here.